What Does an Associate Producer Do?

What is an Associate Producer?

Where is the Associate Producer in the Film Crew Heirarchy?

This film crew hierarchy chart will give you a clear idea of the chain of command for the entire production process.

What Does an Associate Producer Do in Film?

Specifically, the role of the associate producer is fluid and dependent on the scope and the needs of the production.  An associate producer might be very involved with the producer work of obtaining funding or talent or may have a hand in the development of the idea and screenplay. It is a role that is not easily defined. The support is often under the radar or so seamless as not to be perceived.  Do you know what Robin does specifically to aid Batman? Often it is packing a well-timed punch or having the batmobile at the ready when needed. In that way, the associate producer may lack the spotlight, but is likely responsible for the spotlight being at the right spot at the right time on the right person.

What Does an Associate Producer Do in TV?

In television, the producers often are also the writers on the show.  Therefore, the associate producer needs strong writing and editing skills as they are very involved in the creative as well as logistical aspects of the production.

Television can be a pressure cooker, as producers are managing physical production while outlining, writing and editing new scripts about to go into production. Many associate producers in television start out as producer’s assistants where they can truly understand the needs of a producer or a particular company. Sliding into the role of an associate producer is a natural fit.

The role of an associate producer in TV is guided by the individual needs of the producers of the show, but there are often common responsibilities associated with the job whether it be in the writers room, production office or on set:

What Does an Associate Producer Do in Commercials?

Just as with film and television, the role of an associate producer in commercial work is to support the producer creatively and administratively.  Duties and responsibilities can include:

How to Become an Associate Producer

There isn’t a specific roadmap to becoming an associate producer, however a college degree in film producing or management and significant experience in film or broadcast television can be helpful.

Working various positions in the medium of your choice so that you understand the film crew hierarchy and the roles and responsibilities on set will give you a leg up. You will be working closely with the producers and should be familiar with production software and scriptwriting to be able to jump in when needed or take the leadership role when asked. Being able to articulate a story, including pitching and creating loglines in a concise manner is a useful skill.

Producer positions require problem-solving skills, communication skills, a passion for entertainment, and the ability to coordinate assignments on a day-to-day basis. If you are working for a production company that is involved in several different productions at once, you should be prepared to juggle workloads and be flexible.

And the compensation?  According to Producer, Chris Rokaz  “the salary for an associate producer can range from next to nothing to $13 million a year depending on whether the production is being made independently or through a studio”

Pretty vague, right?  The right answer to what does an associate producer earn is really what they negotiate.  And since the entertainment industry for a producer can include anything from supporting a multi-million dollar feature film to a sports field reporter, the range is vast.

Here is recent information from Payscale, but understand they don’t have access to film and television budgets and are probably pulling information from local stations and self-reporting of salaries. 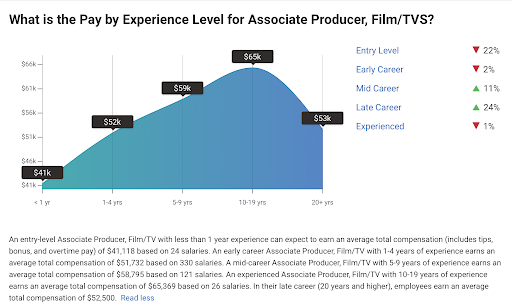