What is a Pre-Production Book

Abraham Lincoln once said “Give me six hours to chop down a tree and I will spend the first four hours sharpening the axe”.  You can think about pre-production in the filmmaking process as sharpening the axe. It is all the preparation and planning necessary to have a successful production.  In no place in the business is that more important than in commercial production for advertising, where the vision has to be communicated to clients that may not have a film background and utilizing a pre production book template is crucial to success.

To help us navigate the important role a pre-production book plays in the process toward production and post production, Assemble turned to Ryan Blitzer, CEO & Creative Executive Director, HiRai Creative. 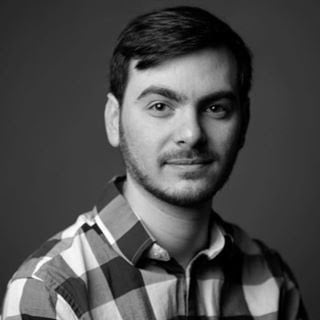 “I find it funny that in all the mediums I’ve worked in (narrative film production, documentary, reality, etc.) that in such a short time frame, commercials have the most effective pre-production.  I think that this is because we are often presenting to people who really don’t know what they want until they see it visually, and in commercials, we do this in the form of a pre-production book, or a ‘PPB’.

The client and agency (who are not film people) HAVE to see things in order to approve them.  It doesn’t help if the location scouting already happened and we say “we’ve secured the street,” they want to see the street.  This makes sense, and forms of this are done in all production mediums, but commercial pre-production books are on a different level.  They are a MUST, unlike other mediums when sometimes information is just accumulated over time and organized nicely in a Dropbox-like format, because the commercial process is extremely quick.  Often commercials are prepped, shot, and wrapped in less than a month.”

A pre-production book is the visual manifestation of all the work that is presented to the client and agency in advance of the shoot for final approval.  Often by the time all the key information reaches the book, everything has already secured a yes from the client and agency. However, seeing it as a whole can ignite needed changes which may affect the film budget.

In addition, the book serves as a hub of information for different departments, making it useful for the producer and director to present information to the rest of the film crew.

Each production company can have a slightly different take on the PPB, but Blitzer broke down for our readers what is standard.

What Goes into a Pre-Production Book


How the Pre-Production Book is Used

The PPB is typically assembled by the lead producer with input from the creative team and distributed to the client at a pre-production meeting, or PPM, a few days before production.  As Blitzer pointed out, the documents included will vary based on the needs of the production.

The length of the book will often dictate the length of the meeting.  The shoot Blitzer referenced above had a 6 hour pre-production call to discuss “the monstrous book.”

Now you know what a pre-production book is, what it’s used for and what is typically included in it.  Depending on the scope of the production, you’ll be compiling all relevant documents which will be shared with the client prior to shooting.  You may be wondering now where to find storyboard templates, production templates, a shot list template–or any filmmaking templates that will assist you in knowing how to put together your pre-production book.

Blitzer’s agency projects are proprietary, but he shared screenshots from a past personal project for reference as a pre-production book template.  Shown are storyboards, script breakdown, shooting schedules and talent examples. 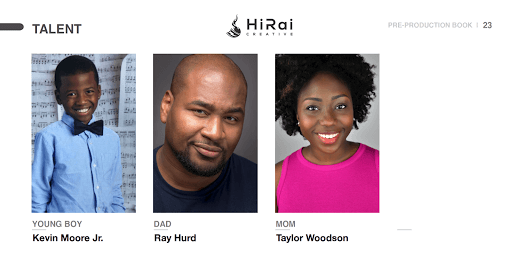 If you don’t want to build your pre-production book from the ground up, you can use  Assemble’s asset management platform, which allows you to create your production binder virtually in the cloud. 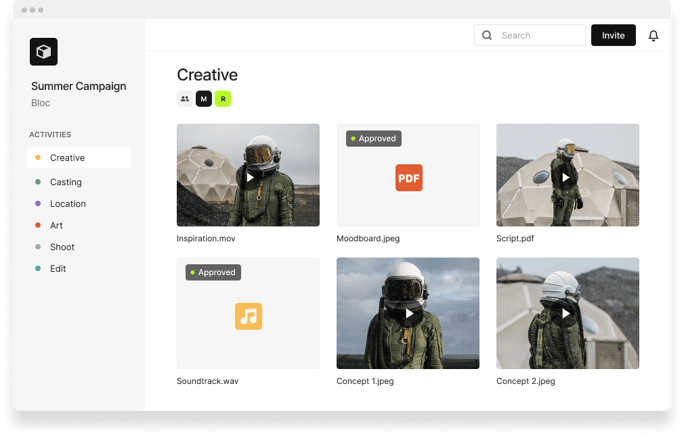