Film is a business and like any business there is a chain of command. No matter what your ambitions are in the film industry, it’s important that you understand the roles and responsibilities for everyone on a film set, who reports to whom and how departments coexist.

Above the Line and Below the Line

First up, understanding the difference between “above the line” vs “below the line”.  These terms relate to the budget of the film, where the crew members for the entire production are listed individually within the overall production costs. They are generally separated by creative development and those who execute the vision.

Above the Line: Creative development of the film; roles such as the Producers, Directors, Cinematographers/Director of Photography, Screenwriters, and Talent.

Below the Line: Those who are responsible for the day-to-day filmmaking involved in pre-production, production, and post-production. Departments such as Camera, Electrical, Grip, Production Design, Costume and Makeup. 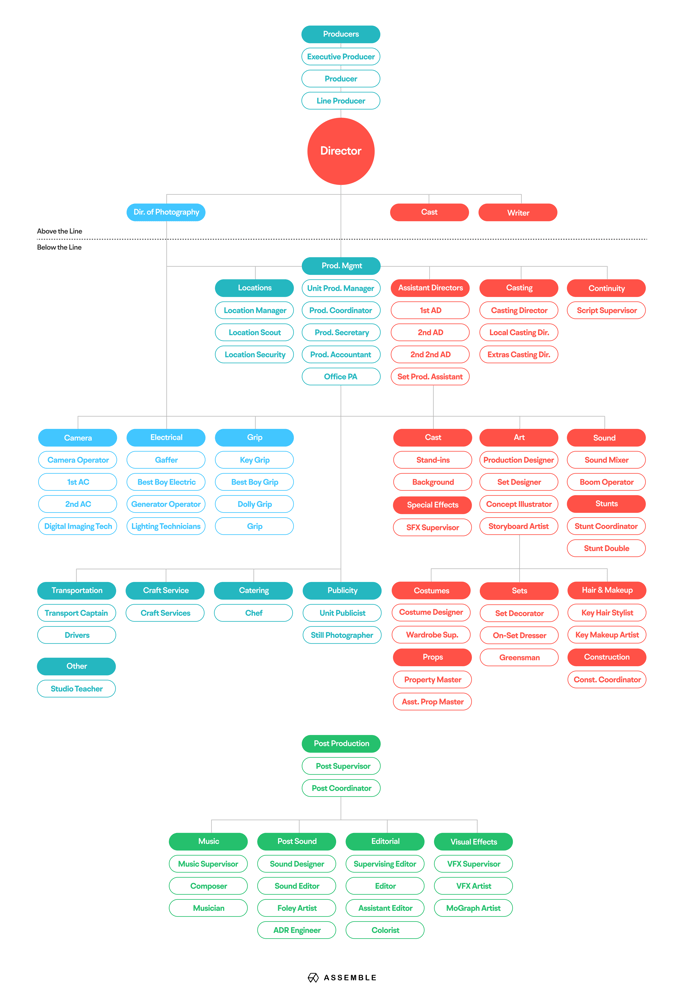 Executive Producer: The person responsible for the financing of the film and therefore the one in charge of the production.

Producer: The person who oversees the film production. The Producer answers to the Executive Producer regarding budget and manages all the moving parts in the production process.

Line Producer: The person responsible for the daily operations of the feature film. They serve the budget, hiring, locations and schedule. During production they handle the day-to-day logistics. In post production they manage deadlines and make sure the budget is on track.

Director:  Controls the artistic vision and guides the talent and crew to bring it to life.

Director of Photography: The person responsible for the photographic look of the film. Also known as the DP or Cinematographer, this person directs the camera and light crews to fulfil the Director’s cinematic vision.

Screenwriter: The person who writes the screenplay.

Talent: The actors who portray the characters in the film. Principal and supporting cast.

1st AD (Assistant Director): This person plans the filming schedule, working with the director, director of photography and other heads of department to ensure an efficient shoot. The 1st AD creates the shooting schedule with the producers and crew heads, oversees the call sheet and makes sure everyone is on time and where they should be in the process. They “call the roll” meaning cues the various department heads to prepare the days filming and is a general diplomat, safety advocate and go-between for the Director and the rest of the crew.

Script Supervisor: Oversees the continuity throughout principal photography of every element of production from shot to shot and scene to scene, including wardrobe, props, set dressing, hair, makeup and the actions of the actors during a scene.

Casting Director: Organizes and facilitates the casting of actors for all the roles in a film.

Location Manager: Responsible for finding and securing locations to be used, obtaining all fire, police and other governmental permits, and coordinating the logistics for the production to complete its work.

Stand-In: The person who substitutes for the actor before filming, for technical purposes such as lighting and camera setup and works closely with the camera crew.

Sound Mixer: This person heads up the department responsible for all the sound recorded during filming. This is predominantly dialogue but can include sound effects and atmosphere.

Stunt Coordinator: Usually an experienced stunt performer. Their job is to arrange the casting (stunt players and stunt doubles) and performance of stunts for the film.

Unit Publicist: The liaison between the outside world and the set. They field the communication from press, fans, local community organizations, film commissions, and any entity interested in the film.

Supervising Editor: Works closely with the Director to achieve the Director’s vision. Oversees the editorial staff in the assembly of the feature film.

Visual Effects Supervisor: Is responsible for achieving the creative aims of the director or producers through the use of visual effects.

Sound Designer: Working closely with the Director, is responsible for the mood, atmosphere and tone of the overall sound landscape which includes dialogue, music, effects, mixing and Foley.

Music Supervisor: Selects and licenses preexisting songs or recordings for use in the film. Usually act as a liaison between the creative and business ends of the process.

The production process on a feature film requires all departments to work closely together. Therefore, the film crew hierarchy is less about the status of who is in charge and more about everyone having a clear understanding of their role, especially in larger productions where time is money.