How to Write a Music Video Treatment [Example]

Just as sketching is essential to the painter’s process, a written and visual treatment is fundamental to the music video director. There are so many variables when taking an audio track to a visual medium and we’ve got you covered on the steps needed to translate your idea from script to screen.

In this article we'll dive into an overview of the history, purpose and methods of music videos before exploring actual treatments and storyboards from filmmaker Daniel Iglesias Jr, music video director Jakob Owens and Texas folk group, Rosco Johnny.

If you're interested in more, Assemble recently interviewed legendary hip-hop music video director, Matt Alonzo on our podcast, where he breaks down his creative process for working with artists such as Justin Bieber, The Game and Chris Brown.

The Evolution of the Music Video 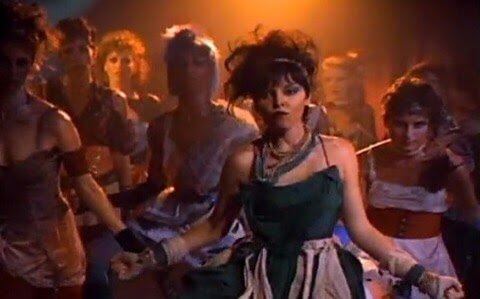 Music and film have always had a symbiotic relationship. But a music video is not just a filmed performance; it is storytelling.  The images and the performers' engagement with the camera have a purpose beyond simply entertaining. The ones that stay with you after the song is done have an emotional result.  Whether it’s feeling Pat Benatar’s empowerment in Love is a Battlefield or the chills Michael Jackson delivers in the nearly fourteen minute short film video of Thriller.  Innovative concepts heighten the impact a song has on those that listen and can boost awareness and sales.

No one understood that better than David Bowie.  He is often credited as creating the modern idea of the music video and the power it could have in the marketplace.  In his article in Art and Seek, Dallas Videofest’s Bart Weiss described Bowie’s influence this way  “Because of his stage training, his interest in costumes and fashion and visual art, his exploration of performance personas, his drive to wed his music with unconventional imagery that wasn’t a literal representation of either his concerts or his lyrics, Bowie took to video as a perfect extension  /  expression”

Bowie first explored the use of a music video collaborating with director, David Mallet, with his 1979 version of Space Oddity, but it was their next video for Ashes To Ashes, at the time the most expensive pop video ever (and shot a year before MTV launched in 1981) that proved music videos were viable promotional investments for record labels. It helped the song's mainstream popularity, even though it was as edgy and alternative as Bowie himself.

In a piece in NPR, author Jason Heller offered this on Mallet’s use of all Bowie’s alter egos from Major Tom through The Thin White Duke.  “Mallet used the new computer graphics workstation Paintbox to radically alter the color palette of the short film, rendering the sky black and the ocean pink. Bowie alternates between portraying a clown, an astronaut, and the inmate of an insane asylum — paralleling the many roles he'd played in his career”

There are many ways to put together an idea for a music video.  In Bowie's case in Ashes to Ashes, he primarily used drawing and storyboards (these are exhibited at the Victoria and Albert Museum, which gives the public insight into his creative process.) You can see his notes on the drawing also included camera moves, framing and use of color. 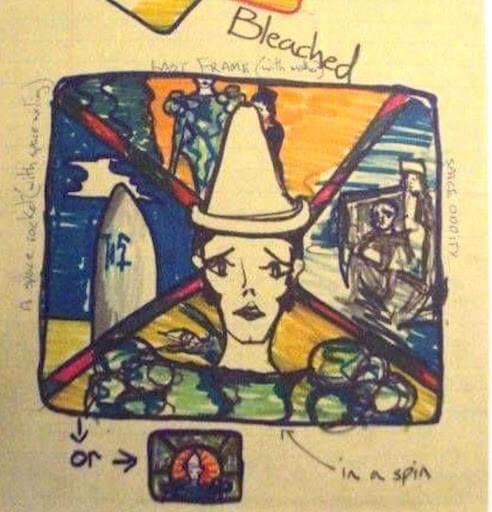 Just as a narrative film starts out as an idea, becomes story beats and then a script, the music video translates ideas into a written treatment. Every artist works differently. Sometimes a director’s concept can spring from a consultation directly with talent or the director may work independently and submit several ideas which are worked together to refine in pre-production.

A music video treatment is a roadmap for what you will deliver to the artist. It is a written and visual way to sell your idea for the video. One of the more common mistakes when writing treatments is making them too dense and not visually driven. Remember that a music video is using images to sell the story and your video treatment should reflect that. Think of the text more as bullet points that simply get the main idea across, but it’s the images you choose to include that will excite the artist and get them on board with your concept.

Here are a few things to consider before you put together your treatment:

There isn’t one way to prepare a treatment.  It can be a very simple written document with images, a google slide presentation or even a video pitch.  Taking notes from the feature film world, when director Kevin Tancharoen pitched himself to direct the screen adaptation of The Hunger Games, he created a trailer mashup that showed his vision for the material.  Eventually Gary Ross was hired, but you can see from Tancharoen’s video that his version of The Hunger Games would have been a much darker and grittier affair.

Daniel Iglesias Jr. was raised in the outskirts of LA and trained as an actor before he made the natural transition to filmmaking. Nowhere is it more evident then in his first music video for The Neighborhood’s Sweater Weather where he uses Southern California as nearly a character on screen, it’s starkly black and white and full of energetic cuts juxtapositioned with slow drives on lonely and then vibrant street scenes.

That video catapulted his career with over 500 million views. Getting our hands on some of Iglesias Jr’s pitches, it’s easy to see why his videos are so dynamic, nothing is left to chance–he does a meticulous job detailing his concept, his influences, imagery and the aesthetic world he wants to capture on film.

If you want to see inside a professional director's approach, download Daniel Iglesias Jr's expansive music video treatment for the Kali Uchis song Mando below.

Jakob Owens offers a very clean and clear music video treatment example for G-Eazy’s Down for Me. The official video was directed by Edgar Esteves and you can see Owen’s approach is vastly different. 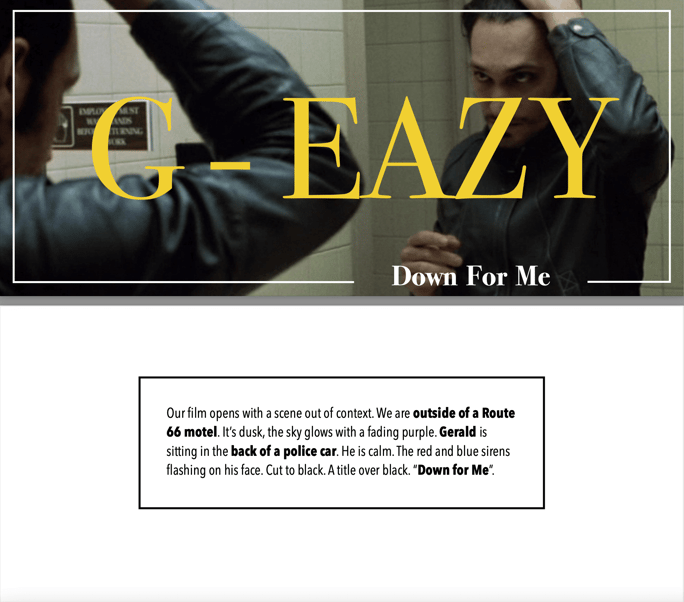 He uses images prominently and creates much space on the page, being very sparse with the words.  He creates emphasis by bolding important people, locations and props. 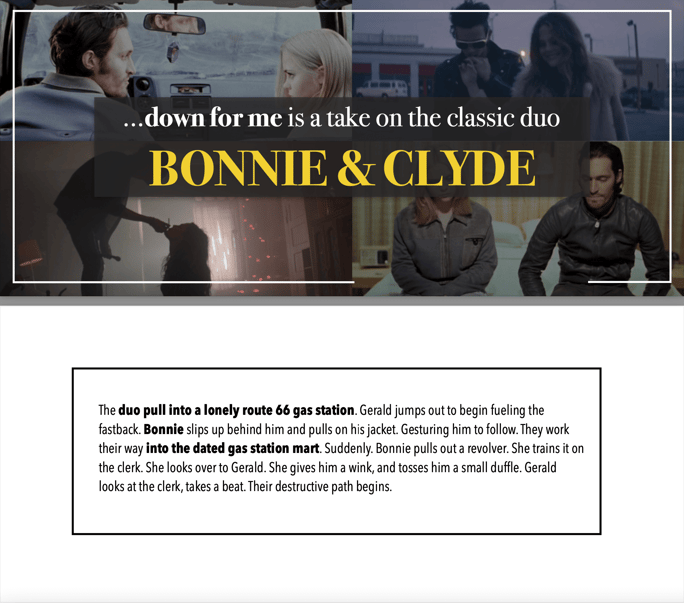 Just as Tancharoen used clips from other films to put together his mood reel pitch for The Hunger Games, Owens uses images of Vincent Gallo and Christina Ricci from the 1988 film, Buffalo 66 and references real life criminals Bonnie & Clyde to show the desperation and misguided frenzy of young lovers on the run.

Rosco Johnny is a family affair as the band trio is made up of husband and wife Justin Philip Brooks, Tiffany Brooks and Tiffany’s brother Morgan Taylor.  Their sound is a blend of Texas style country with folk and bluegrass roots. The song and the video for their ethereal song, Lullabye, is as Justin describes revolves around  “the theme that sometimes what we fear is not as terrifying as what we’ve built it up in our minds to be. The visuals capture this dread and the fear of the unknown, but it ends with a sense of wonder, relief, and not really knowing if it was all a dream.”

Justin shared with us the storyboard video that director Clay Hervey at Saltbox created for Lullabye.

So how did it go from song to storyboard?  Justin shared the creative process.

The idea to shoot the video came about through organic conversations with our friend and film director, Clay Hervey. We had just released our first two EP’s as Rosco Johnny, and we began talking about how cool it would be to do a video together. Several of our songs were contenders, but we settled on “Lullabye” as it tells an evocative story that would open up all sorts of visual possibilities. It tells the story of strange sounds coming from the woods on the outskirts of a town, where no one would dare to go. As we discussed the lyrics, Clay eventually said, “I love the idea of a beautiful bad dream”, which was perfect. I told him, “I just had a visceral reaction to that; a good shiver up the spine.” Clay drew up the storyboard, and after looking back, it’s amazing to see that the final video is almost shot-by-shot identical to the original vision.

The video products you put out should be a reflection of your artistic vision and fulfill the promise of the song and the brand of the artist.  A clean, clear and professional representation of your idea whether it’s as a written treatment, a slideshow of images or a video mashup is key.  The artist or the record label is not just hiring someone who is wildly creative, but someone who can deliver the goods.  Your treatment should not only show them your ideas, but your ability to realize it.  Be prepared, be organized and show your passion for the song, the artist and your vision.