What is Screen Direction in Filmmaking

Screen direction is important in editing. Directors shoot a scene using various framing and angles. An editor might have a wide master shot of the entire scene from start to finish and then a variety of camera movements taken from various angles and sizes (medium-shots, close-ups, extreme close-ups, inserts).  When piecing these together to form a cohesive scene, it’s important that the director make choices with the camera that keep the screen direction consistent.

This brings us to the 180 degree rule.

This is an imaginary line that cuts the frame horizontally, also referred to as the “x-axis line”.  When you are filming the actors, you should stay on one side of the imaginary axis between them so that the viewer is orientated to where everything is in the scene.  Keeping the camera on one side of the 180 degree line makes sure the actors keep the same left  / right relationship with one another. Scenes filmed this way make the action feel natural and the camera movements seamless.

In this scene from Sydney Pollack’s The Way We Were, the characters have movement, but the camera placement remains consistent.

This is the first shot where Pollack establishes the camera placement line with this shot over Streisand’s left shoulder.  Redford calls to her from across the street and she talks to him.

She crosses the street and the first set up of them talking happens in a medium shot for both of them with the camera placed over her left shoulder, and on the reverse shot, over his right shoulder.

He charms her and she agrees to join him for a drink.  She sits down and a new position is established.

One thing to notice is that Streisand feels small and vulnerable emotionally.  Pollack puts Redford screen left and higher in the frame to emphasize that.  They are now sitting, but Pollack keeps the continuity of shooting coverage over the right shoulder of Redford, and the left shoulder of Streisand.

After the conversation, she begins to leave and he calls back to her with news. The camera stays over her left shoulder for continuity.

Right before she actually leaves, Redford notices her shoe is untied and asks her to put her foot on his thigh.  It’s a beautiful, intimate moment and Pollack keeps the rule intact, shooting it from the perspective of Streisand’s left side.

Sometimes a filmmaker will break the rule on purpose to add an element of disorientation to a scene. In Stanley Kubrick’s The Shining, as Jack Nicholson’s character is slowly going mad, this scene illustrates his fractured mental state. 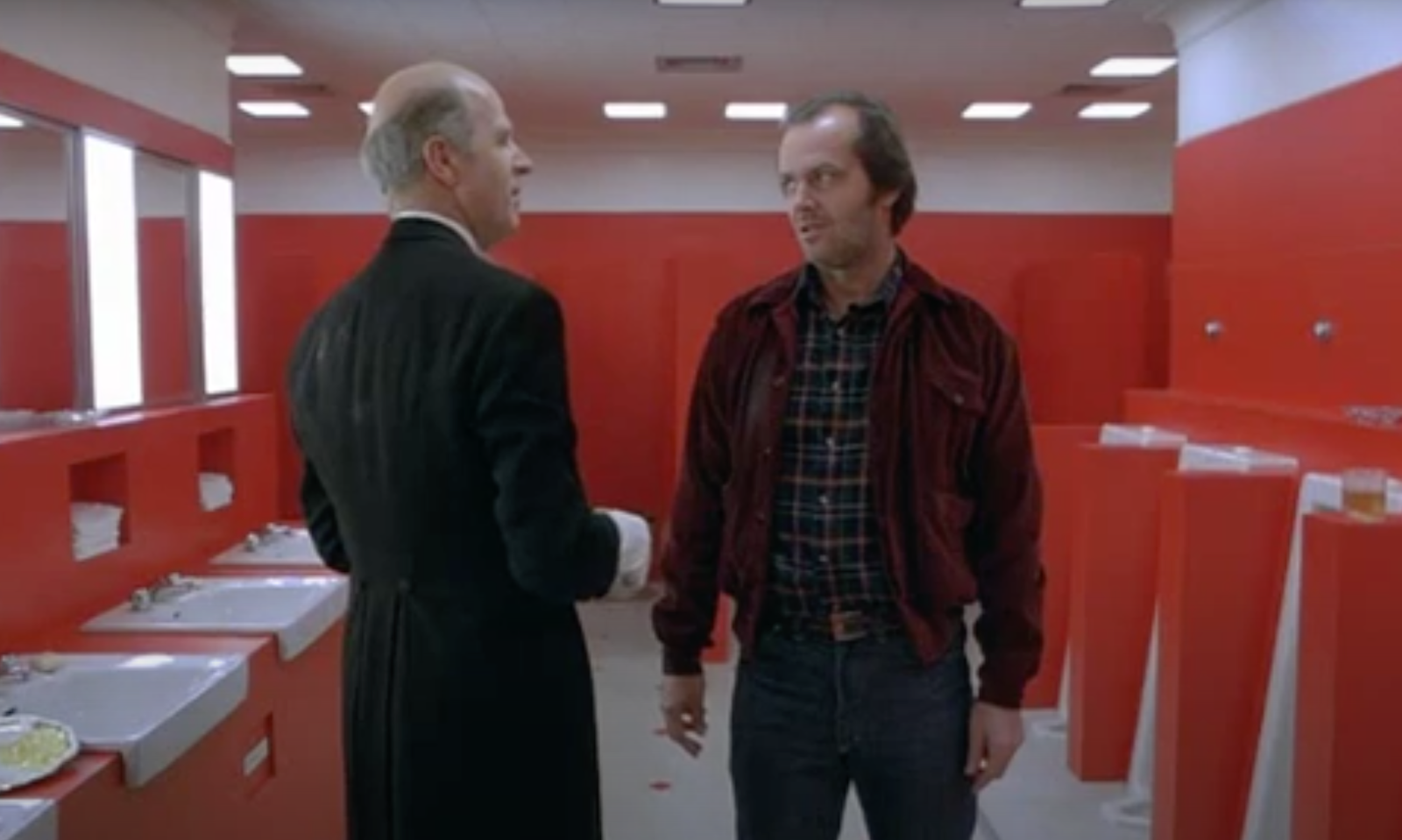 The two actors are established on one side of the line with Nicholson camera right of the frame. 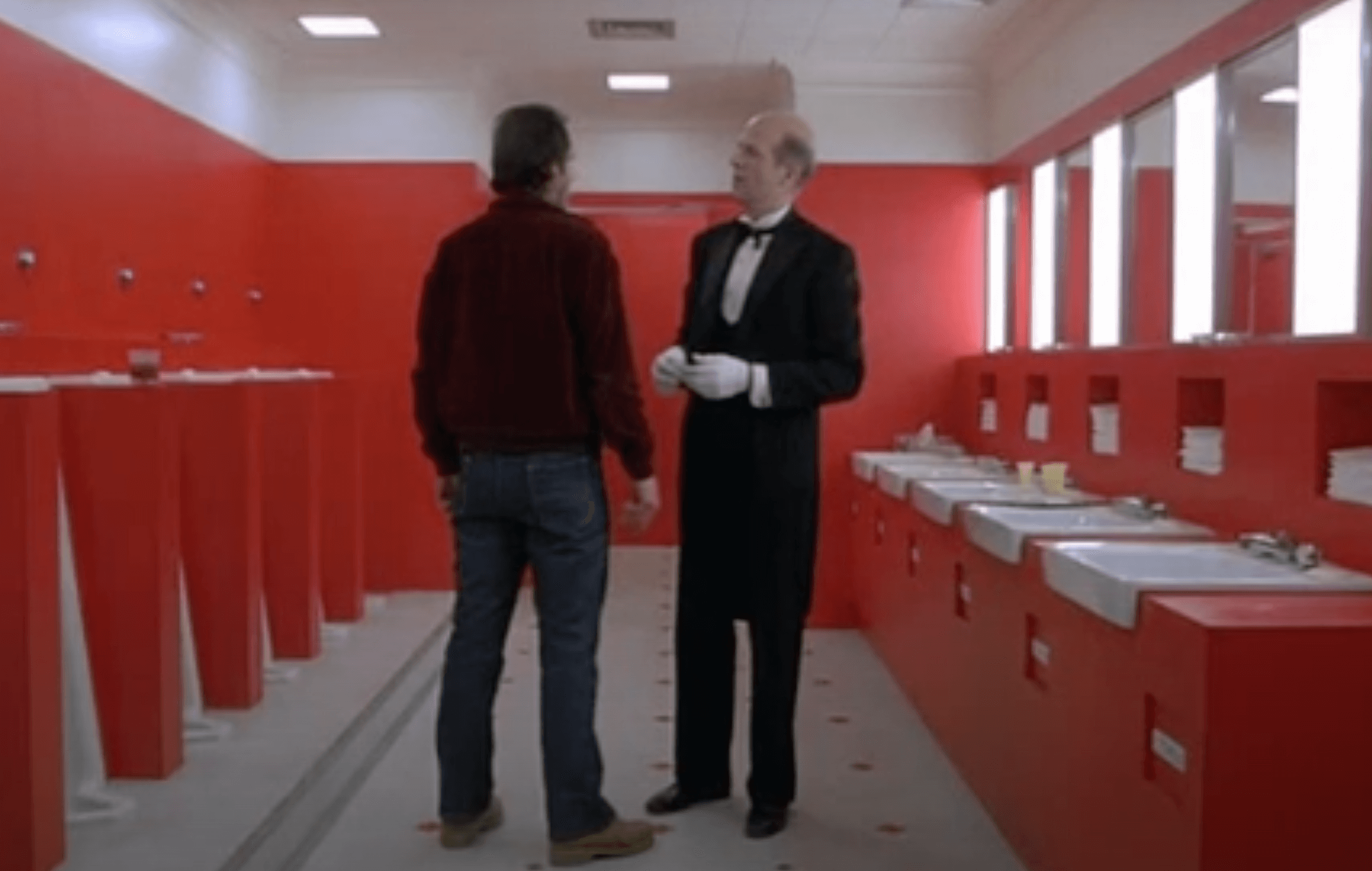 In the next shot, it is reversed. 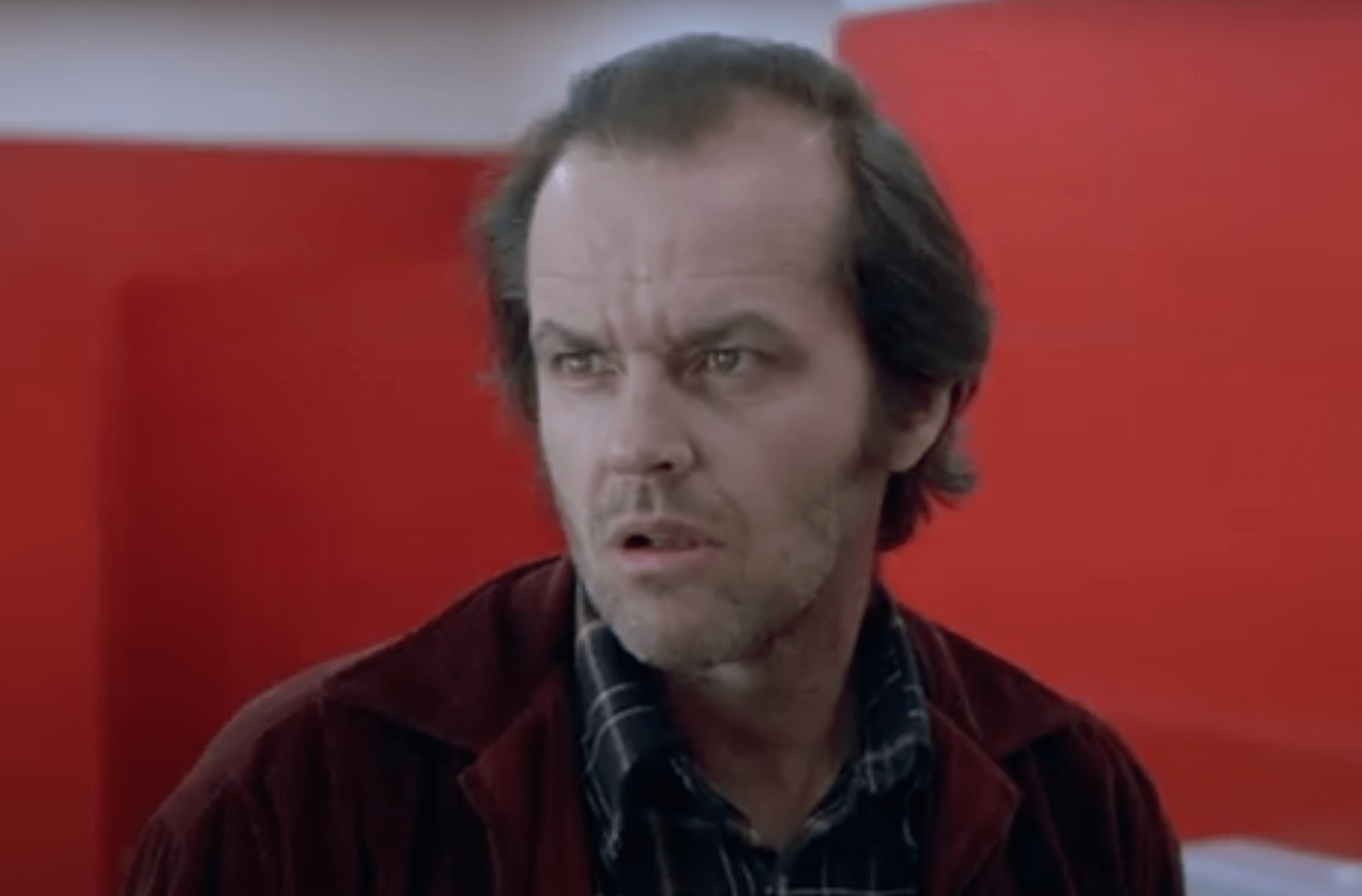 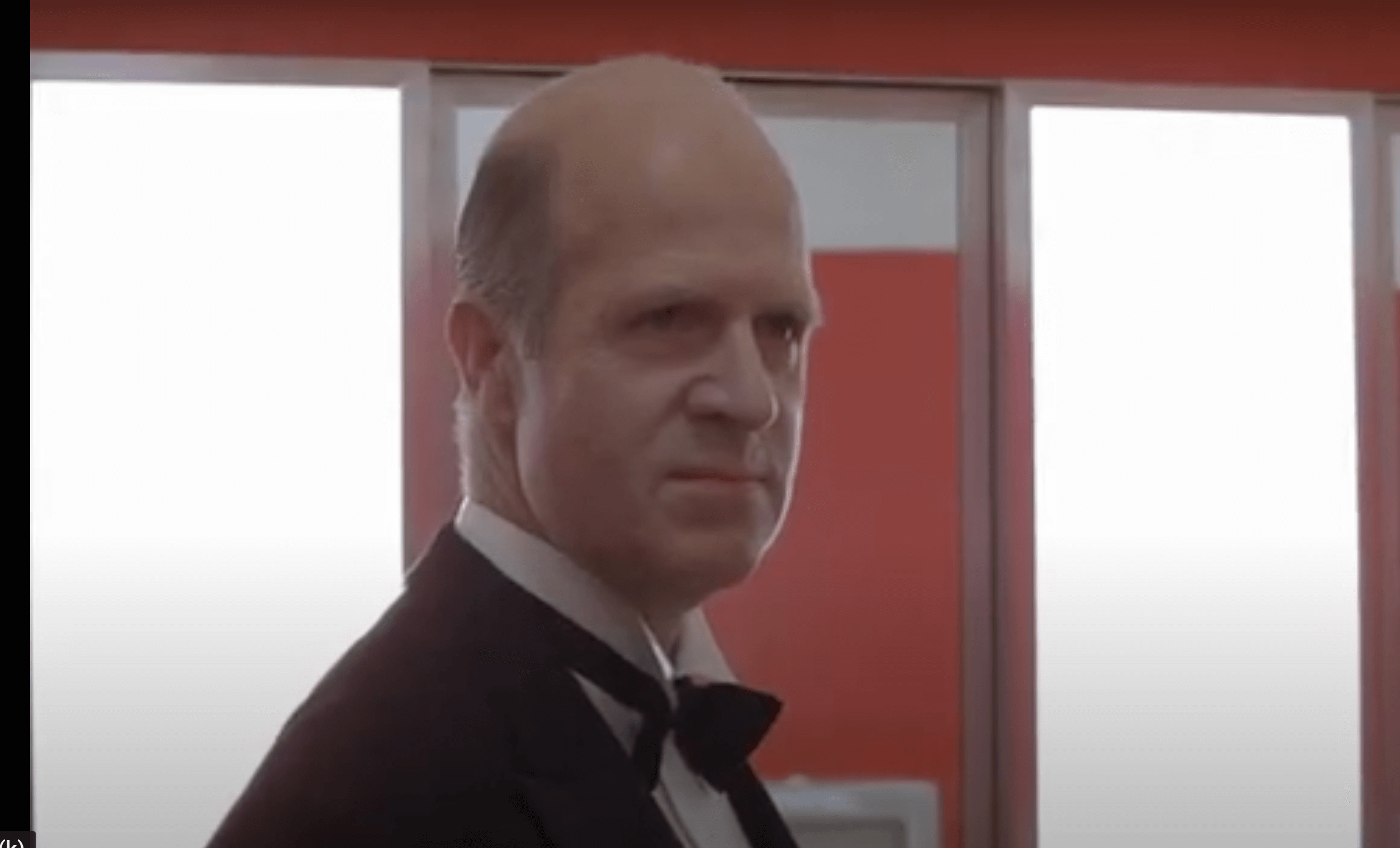 When the scene cuts into close ups of the characters, the eye line is slightly off, making them seem evasive and combative.

The purpose of screen direction is to avoid confusion and allow the audience to have an understanding of the continuity of action. This means the editor must establish and maintain a consistent left-to-right or right-to-left pattern. If a character exits the house walking left to right, forgets their keys and comes back, they must re-enter the frame right-to-left for continuity.  If they exit the house left-to-right and the next scene is a continuous shot of them coming through the door and walking to their car, for continuity they would enter frame left and walk right.

Preserving this sense of direction is particularly important when a scene has more than one character. If one character is following another, the same directional pattern will work fine, but if they are coming from two different directions and will meet at a central location, a separate direction must be maintained for each character.

Take for example, the opening scene from Strangers on a Train. A cab pulls up and a man exits the cab and walks into a train station. Then it cuts to a second cab and another man exits and walks into the station. We only see each man from the knee down and the focus is on the shoes.  One, flamboyant, the other conservative.  The flamboyant shoe walks from right-to-left, while the conservative walks from left-to-right. 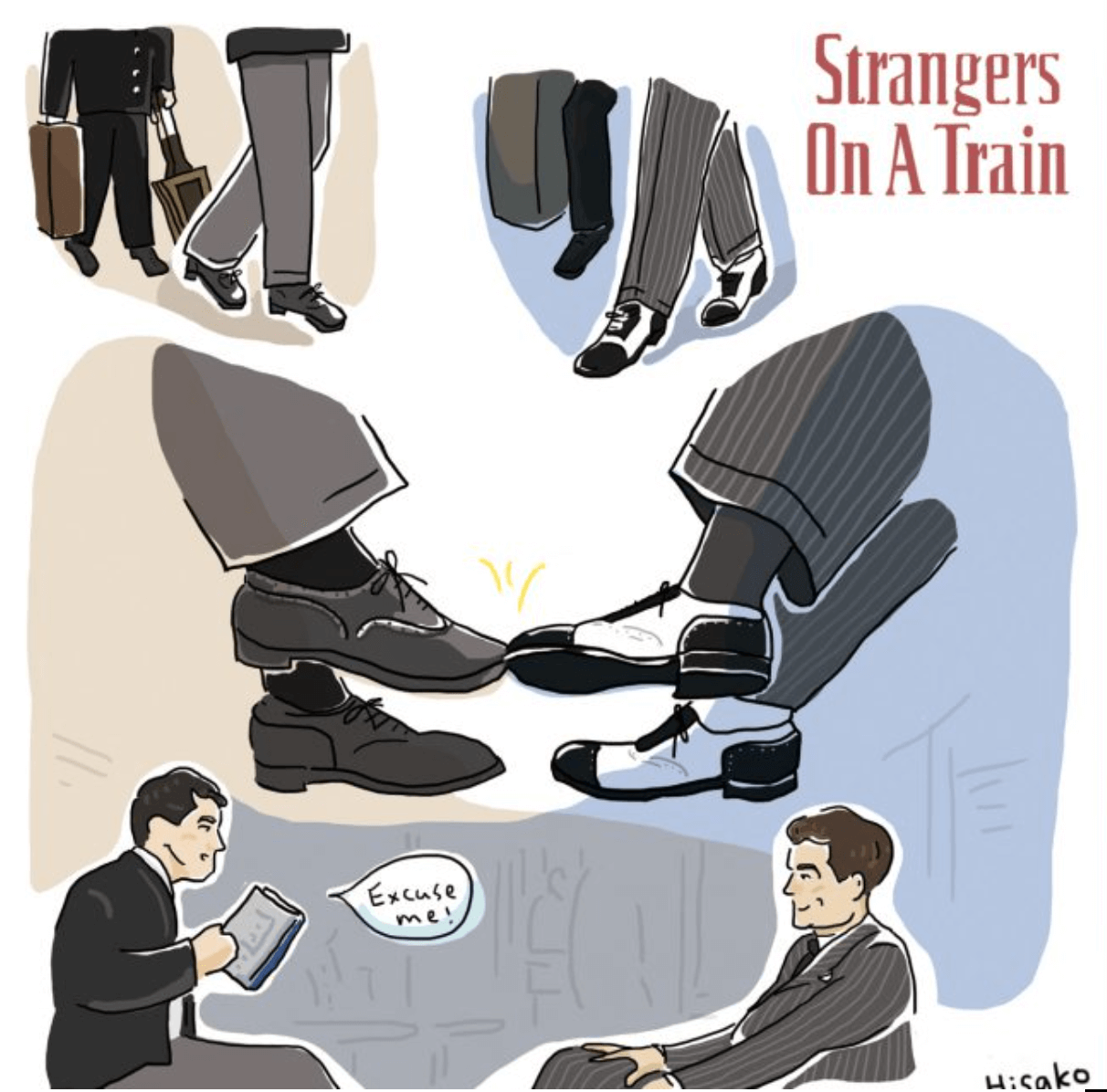 Their walk is inter-cut and it gives the viewer the inevitable feeling that they are on a collision course.  Because we expect a collision, the film within the first minute sets up conflict and intrigue. The film makes us wait.  The next cut has each man go single file through a turnstile. Seconds later they do meet, when their shoes knock each other under a train table.

The Psychology of Screen Direction

Screen direction is the choices you make within the frame that will create continuity and communicate conflict or harmony. This isn’t simply an artistic choice, it’s psychology and science. Do you think it doesn’t matter if your protagonist enters the frame screen left to screen right or vice versa?  Go to the source. Watch a hundred studio films and you are most likely to see the protagonist enter screen left.  Perhaps it’s because as westerners we read left to right, but for whatever reason the audience reacts more positively to a character that moves left to right, it’s more comfortable to our eyes.

"In simplistic terms: Right is more positive, left is more negative. Movement to the right seems more favorable; to the left, less so. The future seems to live on the right, the past on the left.”

Let’s look at this scene from Quentin Tarantino’s Kill Bill.  The antagonist, Daryl Hannah, walks toward the camera center frame. He uses a slight low angle to establish her dominance.

Just as she turns camera right into a door, Tarantino cuts to the reverse angle, so we see her movement go from camera right to left (remember she’s the bad guy).

Here is the reverse angle where her movement is now going right to left.  It is a very quick cut, but important because Tarantino wants to be consistent with Hannah being the antagonist.  This is the psychology of screen direction at play here. He purposely breaks the 180 rule to put the viewer subconsciously off balance.  If he didn’t do this it would keep the continuity of the scene, but it’s masterful in communicating something menacing about this character.

The camera continues down the hall without Hannah and then pans right to a shot of our vulnerable protagonist, Uma Thurman, lying unconscious in bed.

The camera continues its movement, then dissolves to a cut into the room on a close-up of Thurman. Then split screens to Hannah on the right getting into costume for her assault.  Protagonist on left, antagonist on right.

The shot switches to a close-up of Thurman’s fingers as the camera moves left to right up her arm, while the right side of the screen shows Hannah preparing the poison that she intends to inject in that arm.

Once Hannah is dressed, she moves camera right to left (once again, as the antagonist) out of the room and down the hall toward our protagonist.  Tarantino moves into an extreme close-up of Thurman to heighten the disturbing scene.

The camera stays in split screen as Hannah walks toward Thurman’s room.  As soon as she arrives, Hannah’s side of the split screen looms large, pushing Thurman to the left and gone.

The sequence ends with the camera viewing Thurman over Hannah’s left shoulder.

Now you know the answer to “what is screen direction”. By following the 180 degree rule you establish it and orient the viewer to the spatial elements in the scene.  Characters that are walking toward each other, appear that way. Characters that are having a conversation and facing each other appear that way, keeping the scene realistic to the eye.

When you cross the line, you can confuse the viewer.  For example, two characters in conversation shot from opposite sides of the 180 degree line will appear to be facing the same direction and not talking to each other.  Can that be an artistic choice? Can you ever cross the line?  Absolutely.  If your intention is to disorientate the viewer or create chaos, it could work in your favor.

Another way to get around the consistency of the line is to have the editor cut away to a neutral shot therefore establishing a new line when you cut back.

The rules of screen direction help you edit a cohesive scene. When following the 180 degree rule, the camera should be kept on one side of the imaginary line so the character's eye line matches with other characters or objects in the scene. Knowing the rules of screen direction allows you the freedom to break it on occasion when making a deliberate aesthetic choice that supports the storytelling.