So, what does that all mean?

To take us through all of the elements that make up the post production process, Assemble reached out to prolific Post Production Supervisor Layla Blackman (HBO’s Big Little Lies and Run) and Christie Price, Senior Post Producer at Panay Films/Blk Ops, a hybrid film production company and video production marketing agency.

Price has managed all aspects of post production for over twenty years and has a reverence for its role in the filmmaking process. It’s not simply technical, it is an integral part of storytelling.

“Post Production to a project is as important as turning a camera on to film an idea. It allows for the meaning of the message to be shared with others and for the storytelling to come to life, using color, VFX, GFX (animated graphic design), sound design, a music track and VO (voiceover). Post production’s main goal is to take any idea and implant a “vision” in the viewer’s mind about what they are seeing or hearing.”

It used to be that post production didn’t officially start until production wrapped, but that’s evolved. Blackman shared that the chain of command in hiring is often fluid, as she is sometimes hired by a producer, the director or will even be recommended by the studio.

“If we go back 15 years as a post supervisor my job started on shoot wrap.  Whereas now as a post producer, which is a relatively new role, I start in soft prep all through the shoot.  We actively are involved in post production from the very early stages of prep.”

To get a clear picture, Blackman and Price broke down the process into 5 steps:

Blackman gave us this lean account of the five step process:

“The editor’s job throughout the shoot is to assemble the dailies in line with the script. After the shoot has wrapped, then begins the stage of fine cutting, a highly collaborative process involving the producers, the editors, the director and the studio.  Once picture is locked, post production encompasses sound design, color correction and online, any needed visual effects, titling and a final mix.  Throughout all of these stages, there is a continuous approval process to ensure the best possible creative and technical outcome.”

Assemble can provide flawless planning and logistical support through this important process, enabling your entire team to work together on a collaborative, visual post-production calendar that can shift fluidly as the project progresses through each phase.

Once production has everything on film, it’s the post team’s job to take the raw footage and turn it into the final cut of the film). The process of editing is the first step toward completion of a project. Price explains further:

“The first step is bringing in an editor who hopefully feels a kin to the project. They don’t just see it as you do, but have ideas that can expand upon the structured storyline. Editors will read scripts and review all the dailies from production and via offline media, will create a timeline based on the story they are telling. This timeline is constructed in what’s called an EDL or ‘Edit Decision List’.

From there, the editor collaborates with the Director, DP (Director of Photography), and Studio to find the performances and flow that fit best for the telling of that story. Will it require any computer generated animation or special effects? Will it need a voiceover in certain parts or will dialogue within the shot footage be sufficient? All of these creative decisions are typically finalized during the editorial’ process.”

The sound design team is literally the unseen hero in the post production process. They refine the audio and ensure it sounds its best. The sound editors work with the audio files that correspond to visuals in the edit. placing dialogue and music on the timeline of video editing software. Audio design is not just adding dialogue, music, and voiceovers, Price points out that often it’s the subtleties that make the job an artform.

“Once there is a locked and approved edit, a sound designer will be brought in to add the ‘bells and whistles’ in some of the most simplistic ways. Sounds that we think of as ‘normal;’ are all bytes that the designer has to build for scenes.”

Color grading is used when you are adjusting for aesthetic purposes.  It goes beyond the technical aspects of color timing and allows the filmmaker to be creative with the look and feel of the images.

Blackman takes us through it:

“The final graded picture is part and parcel of the story as a whole.  The feel of the images is part of the story we are telling.  For example, I worked in a comedy where some scenes were quite dark and the showrunner wanted to brighten the actor’s faces so we could see the fullness of their expressions to bring out the humor.

Color correction or color timing sets the mood, the same way that music can for a scene or character.  You’re adjusting the exposure, the white balance, ISO noise (the graininess or clarity of the image) , the color and the contrast so that it feels part of a seamless world or environment so you are in the story and believe it.  It visually carries you through it. “

Online editing is the process of matching the final offline edit in full high resolution and includes painstaking detailed work to fix any issues with the picture.  Blackman had this to add:

“These could include having the boom or crew in shot, digital artifacts, clean ups for historical accuracy, etc.  Online editing also encompasses titling (main and end credits), captioning and simple visual effects such as phone screen comps.”

VFX is the creation or manipulation of any on-screen imagery that is not captured live on film.  Often visual effects are integrated with live-action footage using computer-generated imagery (CGI).  It’s a very important tool for the filmmaker because it allows the creatives to create environments, objects and even large crowds of people that would be cost prohibitive or logistically impractical in the context of a live-action shot.  Companies such as Unreal Engine are on the cutting edge of this technology. Here is an exciting read on how they used a new technique called virtual production on The Mandalorian.

Price offered a more in-depth view of working with VFX:

“Any VFX that needs to be done, shots are given to a vendor to farm out for multiple, if not hundreds of artists, to begin working on. One group of graphic designers may focus on the build of cars, while another will focus on how the sky is to look, or buildings in the surrounding areas. The budgets for VFX is something people don’t really like to think about when in pre-production, but they should. It is a costly, time consuming process and can save any commercial, film or tv show in the long run.”

After the video editing, sound mixing, color grading and VFX ( if needed) is completed, it’s time to put it all together in one cohesive mix.  This is a multilayered process starting with pre-mixing of the dialogues, adding the effects and foley and culminating in a final mix where the music and score is added.  Price summed it up:

“The last stop is the mixer. He will fine tune and finesse so that all dialogue, sfx, sound design and music flows properly within the entire spot or picture.”

Post schedules can be complex and difficult to follow when not privy to the confidential details of an existing project.

Layla Blackman created for our readers a relatively simple post production schedule sample, which gives a “basic outline for a 6 x 60 mins show with lots of VFX”  with a calendar view of timelines and deliverables. 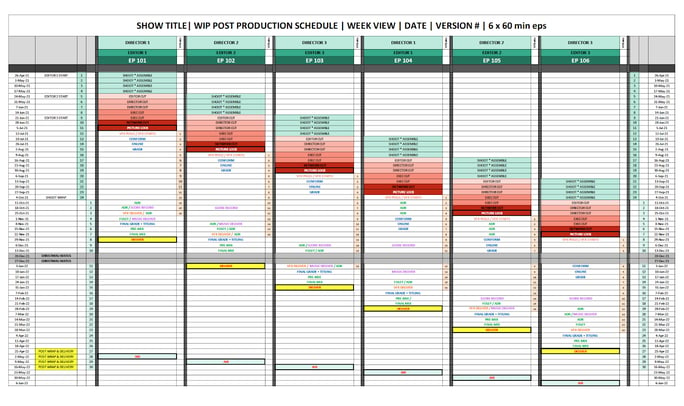 It’s not how you start, but how you finish.  The film post production schedule is an integral part of making sure the creative freedom that began the process is tracked, adapted and managed throughout the edit, sound, picture, VFX and mix.  Using the insights here, you can design a highly effective and productive system.