“If you think it's expensive to hire a professional to do the job, wait until you hire an amateur”.  Firefighter Red Adair wasn’t referring to the film industry, but he could have. Hiring a professional film crew is often key to a successful production, but balancing resources can be challenging.

In this article, we'll explore the day rates for film crew 2022 as set by the film crew unions, the tier system that establishes their minimum pay, and the difference between production and non-production cities.

Day Rates For Film Crew 2022: What You Need to Know

To calculate a crew member’s day rate, there are four considerations to take into account, which we’ll cover in this article:

The first thing to determine with any film or video project is if it is signatory to a union or is a non-union production.  The union has negotiated minimum rates for its members.  If the production is not affiliated with a union, then using standard union rates can be a good guide to determine your worth, even if it is not guaranteed that you will be paid commercial rates.

There are several unions that oversee the interests of the film industry crew.

This allows the union to distinguish between low, lower, lowest and ultra low budget union films.

IASTE developed this system to allow producers to regulate wages and adjust them based on project type and the overall budget of the film. Using this system, lower budget films can set the rates based on budget limitations without exploiting the workers compensation.

The tiers are determined by the following budget ranges: 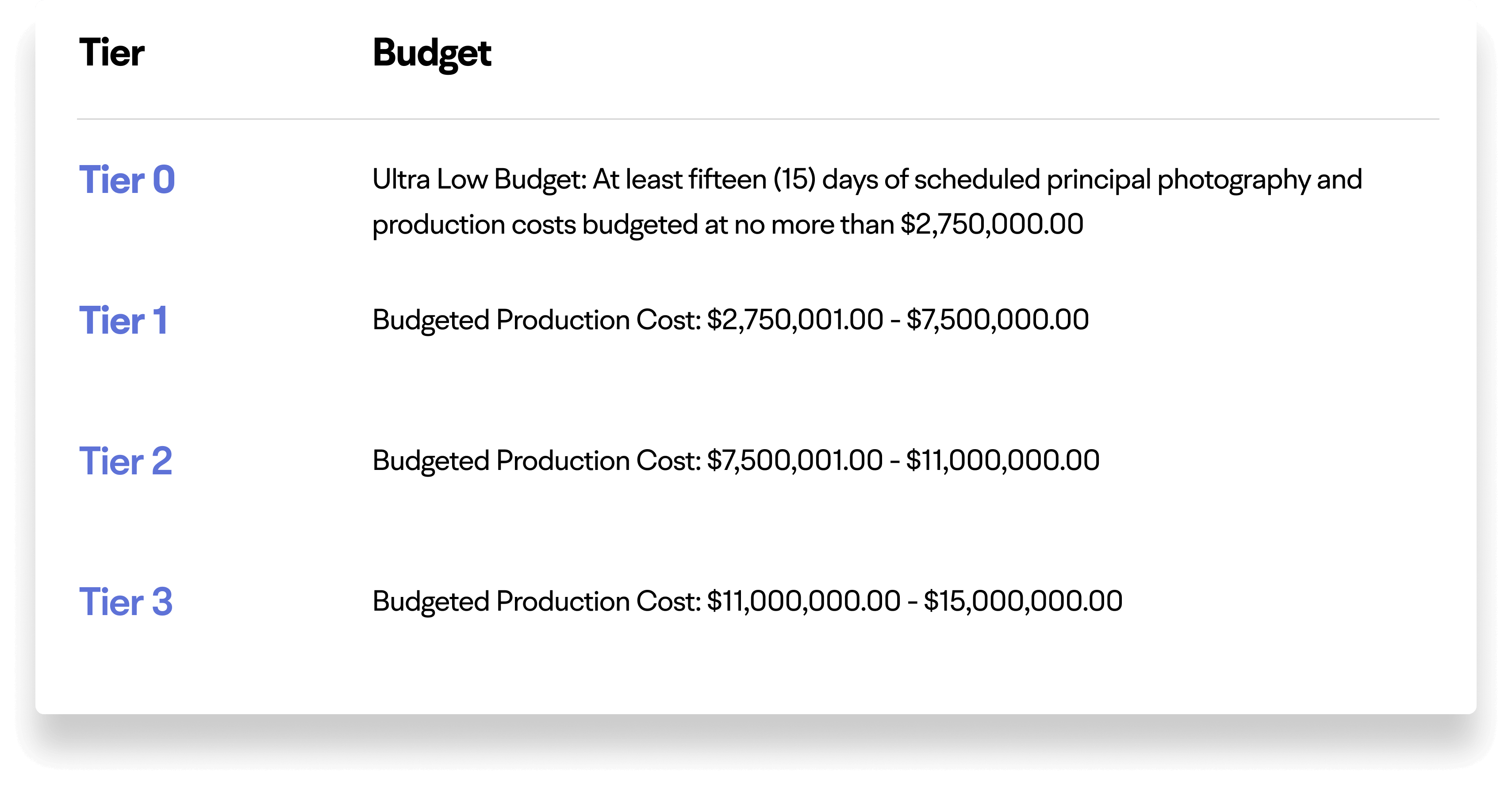 Within the 3 Tiers (not including the Ultra Low Budget), there is a divide between “production cities” and “non-production cities”.  This determines the amount of money that is paid to the crew, with the cities that see less production receiving a slightly lower hourly and day rate.

Length of the Shoot Day

Day rates can differ based on the amount of hours worked in a day. Here is the breakdown of how wages are calculated on a shoot day:

If you know the length of your shoot days up front, you can calculate the day rate for each crew member using the following formulas:

With “Ultra Low Budget Film”, one with at least fifteen days of scheduled principal photography whose production costs do not exceed a budget of  two million and seven- hundred fifty thousand dollars ($2,750,000), the wage rates for covered employees are negotiated with the employee provided however the rates are not less than one-hundred twenty-five percent (125%) of the applicable state statutory minimum wage and overtime shall be computed and paid in compliance with applicable state legislation.

Here is the 2022 Low Budget Theatrical Agreement broken down by hourly day rates for film crew 2022: (any rate “subject to Negotiation” or “STN” shall be greater than any key rate, meaning department heads or key employees).

The Directors Guild of America is a labor organization that represents the creative and economic rights of directors and members of the directorial team working in film, television, commercials, documentaries, news, sports and new media. In film, this includes Directors, Assistant Directors and Unit Production Managers.

Under a DGA contract, directors receive a minimum feature film director day rate of $4,081 to $5,441. However, this is a high level position that is negotiated depending on past quotes, experience and budget of the project. For example, Christopher Nolan was reportedly paid $20 million upfront and 20 percent of the gross for Dunkirk. That’s quite a range from the DGA high budget minimum. 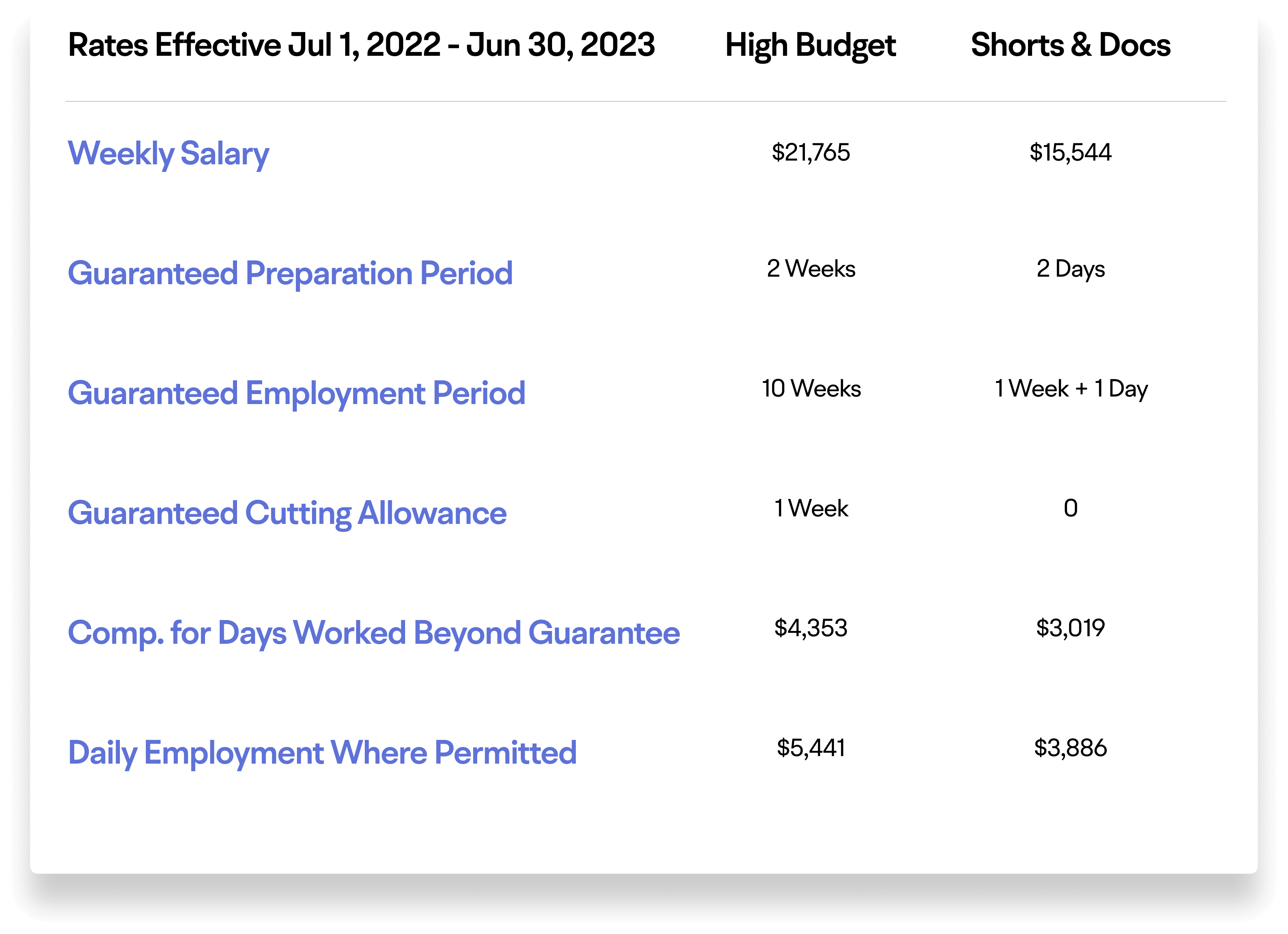 The Motion Picture and Theatrical Trade Division of the Teamsters represents thousands of workers in the motion picture industry, including firms that produce feature films, television programs, commercials and live theatrical productions. The division’s Teamsters in the industry include drivers and other transportation professionals, animal wranglers, casting directors, location scouts and others. In Hollywood, the teamsters union is local 399.

Here is a basic list of teamster film rates:

Below is the Motion Picture Costumers Local 705 pay scale chart showing their range of day rates within the IATSE tier system.

Below is the Local 600 Union Pay Scale Chart showing their range of day rates within the IATSE tier system. The director of photography is a negotiated position.

Local 80 Grip Rates
The grip is the person in charge of setting up or rigging equipment to support the camera and lighting. They assist the cinematographer in preparing the technical aspects of capturing the image on film.

Below is the Local 80 grip rate chart showing their range of day rates within the IATSE tier system.

Local 80 Craft Service Rates
Craft services, or crafty, is a film production position responsible for providing snacks and drinks to all crew members. It is different from catering, which provides hot, sit-down meals. Craft services are technically for the "crafts" -- the grips, costume department, makeup artists, camera and lighting crew -- who need to be fueled throughout the work day.

Below are the Local 80 craft service rates showing their range of day rates within the IATSE tier system.

Crew Rate Example Calculation
Confused yet? Utilizing the IATSE rate card for 2022 and charts provided in this article, it’s easy to determine any day crew rate.

Since a $10,000,000 budget would fall under a Tier Two budget, we’ll check the hourly rate for a key grip using the film crew tier chart. Additionally, since the film shoots in New York, we’ll reference the ‘Production Cities’ number.

Next, calculate the daily rate by referencing the day rate chart above.

And there you have it. The union rate for a key grip comes in at just over $400 per day.

When you are working on a non-union production, the only protection you have in terms of non-union film crew rates is minimum wage of applicable state law.  The best way to know what is a fair wage for any department is to look at what the union has determined is the minimum amount for the budget of the production.  This will give you a range of what to expect when you are negotiating your salary. To help, below are a range of day rates based on the minimum film crew union rates  found in the low-budget theatrical contract.

A camera operator day rate using the IATSE tier system as a guide and an industry standard 10 hour workday would have an approximate minimum pay range of $600 to $650 . It's likely you will pay a camera operator more based on experience, production city, and higher budget.

A union makeup artist day rate using the IATSE tier system as a guide and an industry standard 10 hour workday would have an approximate minimum pay range of $325 to $475.  It’s important to note a kit rental is usually an additional negotiated cost. However, you may pay a union makeup artist more based on experience, production city and higher budget.

A wardrobe stylist rate sheet is dependent on the production and role. A costume designer is a negotiated position depending on past credits and quotes. The wardrobe stylist could be the designer on a small budget production or responsible for dressing the talent. Based on a IATSE union key costumer day rate and a 10 hour industry standard workday, a wardrobe stylist day rate might range from $325 to $400. This could be higher based on experience, budget and production city.

A union gaffer day rate using the IATSE tier system as a guide and an industry standard 10 hour workday would have an approximate minimum pay range of $325 to $400 . You may pay a rigging gaffer more based on experience, production city, and higher budget.

A script supervisor day rate using the IATSE tier system as a guide and an industry standard 10 hour workday would have an approximate minimum pay range of $325 to $450.  It's highly likely that this very important role will be negotiated at a higher rate based on budget, experience, and production city since the minimum pay for a script supervisor is dependent on years in the industry.

A producer’s salary is usually a negotiated flat rate or a percentage of the profits which can result in an enormous payday.  Since there are many types of producers on a film, each with different responsibilities from raising money to coordinating day-to-day logistics, it is difficult to place a number on them. In commercial work, the producer day rate is typically in the $450 to $900 range, but can be much higher.

A production designer's rate is determined by past credits, previous quotes, and the production's budget.  As this is a negotiated rate, there isn’t a minimum to consider. However, typically a production designer day rate can be anywhere from $450 to $2,000.  Keep in mind this number can be much higher depending on the scope of production.

Film fixers arrange interviews, location permits, transport, hotels, and location scouting for films. This is very much like a producer or production coordinator. Often, fixers work for agencies, media companies, and film productions taking place abroad where they need someone local to handle all the details. Production fixer rates vary from $700 to $1000 per day.  However, keep in mind an individual's quote might be much higher depending on the type of project.

The DP (director of photography) or cinematographer is a high level position and their salary is negotiated depending on experience. An established DP can earn six figures or more on a single project.  For the non-union freelancer working low-budget, the director of photography day rate or cinematographer day rate ranges between $1000 to $1800 per day.  You should consider this a conservative estimate when preparing your budget. This is particularly true if you are working with union professionals who will have individual quotes and likely a much higher daily or weekly rate.

A 1st AC day rate or focus puller day rate using the IATSE tier system as a guide and an industry standard 10 hour workday would have an approximate minimum pay range of $325 to $550. As this is a position that works very closely with the cinematographer, it is likely you will pay a 1st AC / focus puller more based on experience, production city, and higher budget.

A 2nd AC day rate using the IATSE tier system as a guide and an industry standard 10 hour workday would have an approximate minimum pay range of $320 to $420. It is likely you will pay a 2nd AC more based on experience, production city, and higher budget.

A key grip day rate using the IATSE tier system as a guide and an industry standard 10 hour workday would have an approximate minimum pay range of $325 to $440 . It's likely you will pay a key grip significantly more based on experience, production city, and higher budget.

Remember that if you are a crew member that is also expected to provide your kit (such as camera, electrical, audio or grip), you should charge extra for the rental.  For standard equipment rental rates comparison, you should visit several rental house websites.

If you are working in cities outside of New York or Los Angeles, you may want to research local film community websites or state film commissions for resources and comparative rates.  For example, if you were seeking work in Atlanta, the Georgia Film Office has a wealth of information.

It is also valuable to know if you are living and working in a right-to-work state.  A right-to-work state is a state that does not require union membership as a condition of employment.  In other states, a person applying for a job where the employees are unionized could be required to join the union as a requirement of being hired. There are 28 states with right-to-work laws: Arizona, Alabama, Arkansas, Florida, Idaho, Georgia, Indiana, Kansas, Iowa, Kentucky, Michigan, Louisiana, Mississippi, Nebraska, Missouri, Nevada, North Dakota, North Carolina, Oklahoma, South Dakota, South Carolina, Tennessee, Utah, Virginia, Texas, Wisconsin, and Wyoming. West Virginia legislation is pending.

Rates for film crews are always changing and often amended. Information on each local union's website is the best source of current information. Here are some helpful resources.