Sundance Filmmaker Zeina Durra on Being a Mom and a Director

Zeina Durra was two for two: Her debut feature, The Imperialists Are Still Alive!, had premiered at Sundance in 2010, and she was back again at the 2020 edition of the festival with her sophomore effort, Luxor, the story of a war zone doctor (played by Andrea Riseborough). Life, though, had changed significantly for Durra in the interim. She was now a mother of three young children. But starting a family hadn’t quelled her directing ambitions one bit.

“I think that if films can incorporate some kind of childcare element, that would be really important for female filmmakers,” Durra told Assemble. In the interview, Durra also discusses what to look for in a good producer, why she shot-lists her films herself, and more.

Assemble: I read somewhere that the idea for this film came from a dream. Tell me about that!

Zeina Durra: I was watching some dramatic film before bed. My kids were asleep. I started to think about the choices I’d made in my life—what I chose to do, what I didn’t choose to do. And then, that night, I went to bed. I had this dream about Luxor [in Egypt]. A woman was walking around it. It was like she embodied the sentiment of the film, somehow.

I really felt the dream, but I didn’t have the means to articulate it yet. I called a really good friend of mine, Zelmira Gainza, to tell her about the film. She’s a DP. I said, “You know what? I should probably make it into a movie.” And she goes, “Well, if you do, I’m going to shoot it.”

I told her about this Egyptian producer, Mohamed Hefzy. I knew he’d be able to give me advice on how to do this. We could do it really indie, with a small crew, and shoot it really fast because we both have children. I knew he happened to be in town—he had a film at the London Film Festival—so I literally saw him the next day for coffee. Then, I spoke to my executive producer, Paul Webster, and he’s like, “Yeah, I’m in.” And that’s how it all came about.

Assemble: It sounds like it came together really quickly!

Durra: Particularly quickly. Well, everything was coming together, but then my mother goes, “Just don’t get pregnant.” Because every time a film had come together in those last 10 years, I would get pregnant, and then I’d be like, “Oh, I can’t make the film.”

Of course, a month later, I got pregnant! But it wasn’t much of a problem. I just couldn’t shoot the film right then—I waited until I’d had the baby, and then we shot three months afterward.

Assemble: That’s an incredible story. On the ground, how did everything come together in terms of the logistics of the production?

Durra: The production on the ground was really easy because Mo just knows everyone. Mo is a great producer. He put together all of the Egyptian crew. Zel brought a U.S. gaffer with her that she trusts. Generally though, the technical teams there are off the charts. 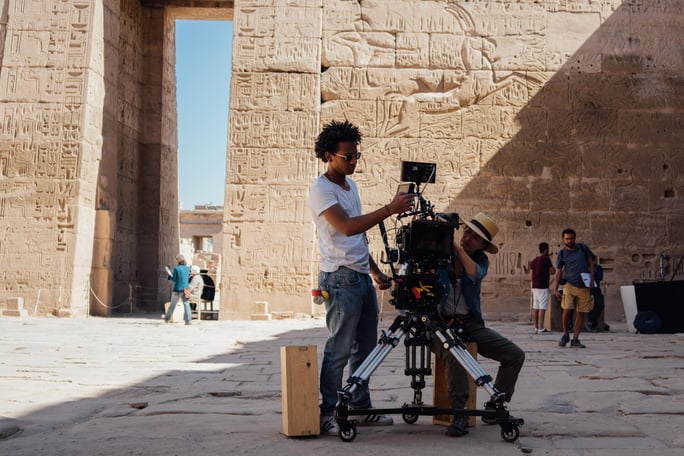 On the set of Luxor.

Assemble: Tell me about working with Zelmira, your DP. The shot-listing process must have been interesting here because your cinematography carries a lot of thematic weight.

Durra: We have known each other for a long time. We had gone to Oxford together. She was the camera assistant on my thesis film!

In terms of shot-listing, I’m a really hands-on director. At NYU, we were highly trained in shot-listing. It’s very important. So I shot-list myself, and I choose a lens myself. But I really need a DP that can execute what’s in my brain, because I’m so specific.

A lot of DPs come with a lot of ego. Zelmira doesn’t. She tries to get into your head.

I also knew I really needed someone good for this shoot because it was going to be tough. I also needed somebody that would be cool with having kids around because I would have my baby [on set]. And I knew she was a mom.

On set, we’d do the shot while my baby was crying himself to sleep. I think that if I had someone else as a DP, that wouldn’t have been cool.

Assemble: How did it work, logistically, with the kids on set? This, I think, is what holds many female directors back when they want to start a family. They just don’t know how to do both.

Durra: Well, it was really fun to learn that I could do it with them, and it all turned out fine.

In terms of mothers on sets, it’s really all about how the director dictates their energy. Like, if you’re cool with your kids being on set and your DP’s kids being on set, anyone else can have their kids on set. They’re just sitting in the back seeing their moms work, and it’s really nice.

Once, my kids got a bit loud. And so we put them in the production van, and then they drove off with the nanny and they were having fun in the van, listening to music. They rejoined us once they’d calmed down.

Of course, there is the issue of the financial support a film can get. For my film, Mo made sure there was money to pay for a room for my nanny. On an indie movie, especially, it’s very hard to get that stuff done. But Mo understood. That was just so supportive. I think that if films can incorporate some kind of childcare element, that would be really important for female filmmakers. 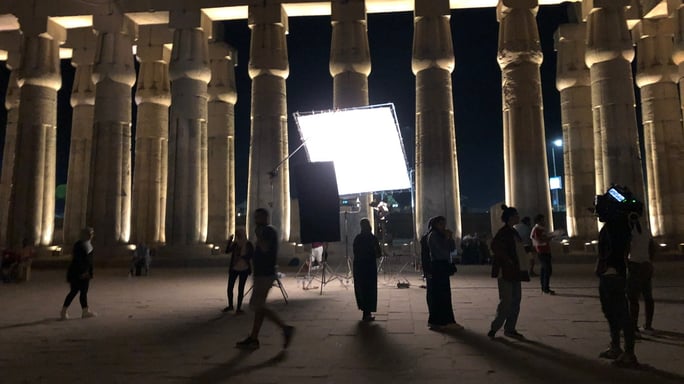 Assemble: Mo sounds like the right kind of producer to have on your side.

Durra: Mo is great because he’s what a producer should be. There’s a lot of fear in producing, obviously, because there’s money, and you don’t know what you’re going to get. But Mo doesn’t approach filmmaking from a space of fear. He approaches it from a nurturing space.

He’s like, “Okay, in this script, I think there’s something missing. I think you can give it another shot. Just do another draft. You’ll know what it needs. What do you think?”

Paul Webster, who’s my main mentor, is a real veteran producer. He’s the executive producer of this film. He’ll look at my scripts and be like, “I wonder why you’re scared here. You’re a bit scared of pushing this scene. Don’t hold back!”

I always listen to him because I trust him. He doesn’t have an ego. Nor does Mo. They don’t want to own your work; they want to make the best film possible. That’s what you need with a team.