Making House of Dragon: The Most Expensive Show on TV

A show like Game of Thrones was never meant to stay off the screen. Now with a different name, new showrunners, and a cast that could give the original one a run for its money, House of the Dragon is bringing back Game of Thrones in a big way.

At the end of the final season of Game of Thrones, HBO released a making-of documentary that was as thorough as it was insightful. And the trend continued with House of the Dragon. Each episode is followed by a making-of documentary between 20-30 minutes called The House that Built the Dragon. Each video breaks down the major scenes that happened in that week’s episode and recounts the challenges the crew faced. With a show that reportedly costs $200 million to make (about $20 million per episode), there is no shortage of amazing feats the crew accomplished.

Below are a few highlights from The House that Built the Dragon.

The Legend of Harrenhal

f you’re at all familiar with Game of Thrones, either the show or the books, you know of Harrenhal, an ancient castle with a revolving door of owners that never seem to live long enough to enjoy it. But the cursed nature of the castle goes way back to the founding of Westeros. The legend of Harren the Black is one of hubris, thinking that building the largest castle in Westeros would shield him from the ire of the Targaryens. But that didn’t stop dragon fire from destroying his castle, which was left as a stark reminder for future lords aiming for the royal family. 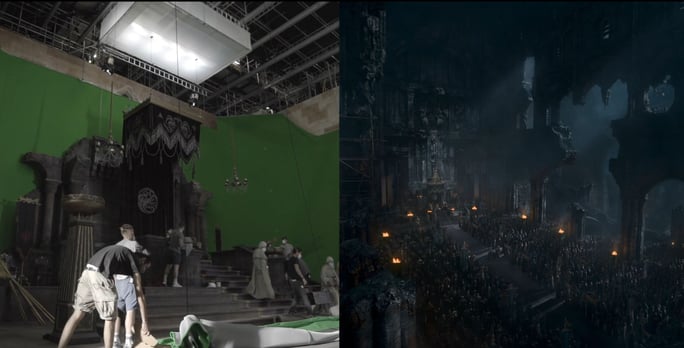 However, the Harrenhal of the original Game of Thrones was just a snippet. In House of the Dragon, Harrenhal is a spectacle of doom. The creators wanted to realize George R.R. Martin’s vision for this grandiose castle, borrowing elements from old churches and cathedrals to lend the made-up building an air of gravitas. But not too much gravitas, as this is the castle famously known for being burned down. The CG recreation of the great call is dilapidated, with shattered pillars and crumbling stones that only adds to the legend of the cursed castle.

The CG was helpful in wide shots, but a portion of the scene did take place on an actual set. It was decided that instead of creating a set for the great hall, which would cost much more money, the crew would build the throne section since this is where most of the close-up action happened. And the crew was resourceful. They re-purposed the throne room from the Red Keep (where the throne sits), which was only partly finished. While the set wasn’t very big, it did serve its purpose without running up the budget.

Compared to the original show, the throne in House of the Dragon is much bigger and more chaotic. Rather than the iconic throne of swords we’ve come to know, the throne in the new show is expanded, with more swords cascading from the throne and down the steps. As the creators mentioned in the making-of-show, this was done to expand the myth of the throne, implying that the extra swords were removed at some point between House of the Dragons and Game of Thrones.

According to the assistant prop modeler, Peter Lee, making the dozens of swords stick straight up required grouping steel rods and draping them in plaster bandages to make them seem like they were melting. It took approximately five months to finish the prop. The sheer number of pointy objects on set also required various warning notices.

At the beginning of any small council meeting, members are supposed to place the ball on the circular marble plate, which has a cutout in the middle for the ball. The act of placing the ball is procedural, a way of signaling that you’ve arrived at the meeting and are ready to begin. Or, as they mention in the making-of-show, it’s essentially each member punching in for work.

The ritual plays out over the entirety of the season, with no one so much as commenting on it. And although it seems natural to members of the small council, viewers familiar with Game of Thrones were a bit lost at first. The prop is not in the original show, nor is it ever mentioned in the books. It was the idea of the set designer, who made the suggestion after noticing the curious marble pieces would make a good pairing. 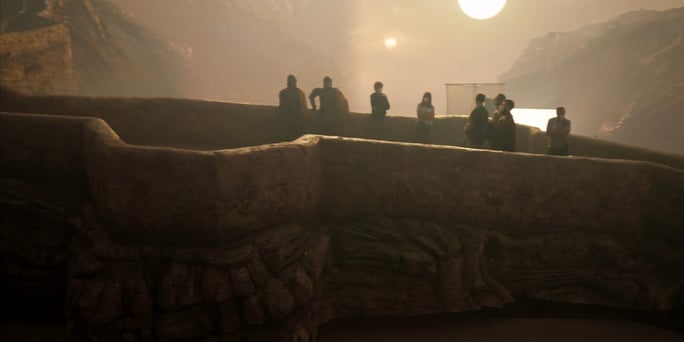 We’ve done a deep dive into virtual production technology if you care to learn more, but essentially, shooting inside a volume gives creators unlimited options. You can be shooting a day scene one moment and a night scene the next, or you can change from one location to another. The best part is it’s all done in real-time, meaning the actors have an actual sense of place rather than a green screen.

Game of Thrones got viewers used to huge battles with a ton of action (remember the battle of the bastards?), but House of the Dragon is decidedly less action-packed. Episode three of the show changes that, with an epic battle finally appearing. The Battle of the Stepstones was a huge undertaking, with dozens, if not hundreds, of extras milling about. But one of the more interesting aspects of this scene is the backdrop.

Filming a big battle was likely not feasible on a virtual production volume, so it was filmed on a beach. But the challenge then became how to make the setting feel real, especially since this battle was supposed to be ensconced by really high cliffs. The solution was to use scenic art, a technique that involves painting the backdrop to look like the real thing. It’s an old trick that’s, according to set designer Jim Clay, is “a dying art.”

While part of the backdrop was green screen, the rest of the surrounding area was a painted backdrop that stretched up a few dozen feet. This gave viewers the sense the battle was taking place in a cove surrounded by high rock walls. The backdrop also made the battle feel more claustrophobic.

Preparing for CG with Cyclops

At the end of episode six of House of the Dragon, a character has an unfortunate experience with a dragon. The crew built  a set with a blue screen backdrop for this scene, but because it required burning a prop with a flamethrower, they needed to get the shot in as few takes as possible. So to prepare and visualize where the dragon would be, the crew used a software called Cyclops on the iPad.

This Unreal Engine software can be used to visualize VFX elements ahead of time. For the show, they used a pre-rendered dragon to scale within the app, which gave the director and cinematographer a concrete idea of where the dragon would be. With this information, they could position the camera correctly to ensure the dragon would be in the frame once it was added in post-production.

Episode seven of House of the Dragon mostly occurred on High Tide, shot on an island known as St. Micheal’s Mount in Cornwall. The location was idyllic, with an ancient castle perched atop a hill and surrounded by water. The fact that the castle belonged to the Velaryons, a seafaring family, made it that much better. But regardless of the beautiful location, getting there was a challenge.

St. Micheal’s Mount is what’s known as a tidal island. At low tide, there is a path one can take from the mainland to the island, but you need a boat if heading to the island at high tide. That made it a logistical nightmare. According to the making-of-show, the crew took two weeks just to get equipment to the island, with set designers arriving a week early to begin prepping the island.

If that wasn’t challenging enough, the crew needed to build a stone platform that jutted out into the sea, which plays a role in a Velaryon burial tradition seen in the episode. To make matters more complicated, the crew was not allowed to drill into the rock to support the platform, so they had to strap down the whole thing and pray the tide didn’t destroy the platform.

In addition to building the platform, set designers added intricate stone carvings and other flairs to make the castle fit into the world of Westeros.

The volatile weather was another challenge that stemmed from shooting on St. Micheal’s Mount for episode seven. The crew spent five days shooting on the island, and the drastic changes from one day to the next made it difficult to match shots. Some days were sunny, while others were overcast, so the solution was to make some day scenes into night scenes. It wasn’t perfect. The VFX team, for example, had to remove harsh shadows and other elements that didn’t make sense for a nighttime scene.

It takes a village, or at least a few hundred crew and VFX artists, to make a show like this happen. Between hauling equipment to a remote location to leveraging new technologies, the production for House of the Dragon was as challenging as it was creative.

The HBO bean counters may scratch their heads, wondering where exactly the alleged $20 million per episode went, but the quality of the show speaks for itself. In fact, the work of this production crew was so on point that the owners of a villa used for the show asked if it was okay to keep the changes made for the scene — one of the changes was a “fake,” semi-outdoor library.

The first season of House of the Dragon has concluded, but it will be back. According to a blog post written by series author George R.R Martin, who’s been releasing the latest installment of the series for a decade, the show is planned to run for four, 10-episode season. If the original Game of Thrones is anything to go by, the next few seasons will be even more of a spectacle. We can’t wait to see it.